Southern Weddings Magazine just launched their premiere issue in January, (Southern Weddings Mag) and we were one of their ‘Real Weddings’ featured! Robin and Winfield were such a delight to work with on their McClellanville wedding. The only thing SWMagazine forgot to mention was the unexpected ‘special guest’ that appeared at the wedding reception…the TOWN DOG! 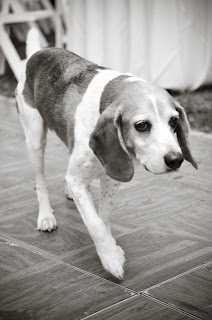 I couldn’t have planned a better ‘special touch’ to this small town wedding, he was the hit of the party, even though I tried many times to wave him away from the food tables. Don’t get me wrong… I LOVE DOGS, but was concerned he would be disrupting the guests…eventually my good friend Dr. Dale Tanner (and my dentist) told me just to “give it up!, he’s not hurting anyone…besides, he lives down the street and comes for all the parties!”